The Future of Metaverse: The Vision of 5 Companies that were at the Web Summit

January 10th, 2023
Mobility, realistic avatars, fulfilling experiences, and asset ownership are some of the topics addressed when discussing the future of the Metaverse. We attended the talks of 5 companies related to this topic and we will tell you all about it in this article.

This year, Web Summit 2022 was again hosted in the city of Lisbon. This international conference on technology, entrepreneurship, and innovation brings together speakers, investors, and the most promising startups from all over the world.

One topic that was very prominent in this conference was the Metaverse and what to expect from it in the future. The Metaverse is a network of interconnected virtual worlds that will eventually allow us to simulate reality, with a strong focus on social connection.

While this concept is not new, the Metaverse is still in its childhood, with only a few worlds created. However, there are several companies leading major projects based on ideas of what the Metaverse could become in the future.

The Future of Metaverse: The Vision of 5 Companies that attended the Web Summit

Our team of Ambassadors of KWAN attended the Web Summit and we’ll tell you firsthand what the representatives from Lighthouse, Reface, Everyrealm, Improbable, and Yuga Labs shared about the future of the Metaverse.

From creating navigation systems inside the Metaverse, to fulfilling experiences with our biggest idols and influencers, and even owning digital assets like NTFs, here are the main ideas from these companies regarding the potential of the Metaverse.

The Google Maps of Metaverse?

Lighthouse is a company that has developed a navigation platform that will work within Metaverse as if it were Google Maps. During its presentation at Web Summit, Justine Massicotte, the company’s co-founder and CTO, stressed the need to discover everything that can be found within Metaverse.

The company’s vision involves indexing, aggregating, and exposing all the information necessary for users to easily perform searches that allow them to move through the different worlds of the Metaverse.

The Metaverse is intrinsically and undeniably a social experiment. In view of this, users will also be able to find their friends and join them through this navigation platform to take advantage of what the worlds have to offer.

Such a structure will help Metaverse remain an open space. And the exciting part? This product is going to be launched within the next few months, so stay tuned!

Reface is a startup that has combined artificial intelligence and machine learning to create a social face swapping app, which allows its users to freely express themselves and create unlimited content (we've all tested how we would look on our favorite celebrities' bodies).

But what does this mean for the future of the Metaverse? Shvets believes that Reface will be able to help us achieve these goals in any digital space.

Over 6 billion videos have been made using the Reface app, which allowed the company to understand that one of the most important things for users is to have an increasingly realistic and appealing experience.

With this in mind, Reface has created a secret weapon: Metahead.

This new technology allows users to create hyper-realistic 3D facial representations in real time using just a picture. But what does this mean for the future of Metaverse?

According to Shvets, this technology will bring about more meaningful experiences in different workspaces, communication, and gaming. It will also forward other practical applications with the creation of different engines, avatars, and specific communication flows (using, for example, platforms like Zoom).

The Metaverse Won't Be For Everyone

Everyrealm is a company committed to developing and investing in the Metaverse real estate ecosystem. It develops projects and infrastructure that bring communities into this virtual world, and monetize them by charging for access.

During her talk at Web Summit, Janine Yorio, the company’s CEO, presented somewhat controversial views regarding the future of Metaverse: she believes that this space will only be based on video games, believing it to be the social network of Gen Z and Gen Alpha.

Many people imagine a scenario like the one seen in the movie “Ready Player One” when they think about the future of Metaverse. A platform that relies on VR and AR technology where you can play any kind of game and do just about anything.

Janine doesn’t believe that this is the future of the Metaverse. Considering that few people have VR equipment (even in the midst of a tech conference), she believes that Metaverse will adapt to hardware that most people already own: smartphones, laptops, and consoles.

Furthermore, she believes that the Metaverse will only be used by the young people of Gen Z and Gen Alpha. The kids who grew up during the pandemic and spent their time playing video games and interacting with their friends virtually.

There are already several worlds in the Metaverse, but the only ones capable of attracting hundreds of thousands of users are those based on addictive game mechanics, such as Minecraft, Fortnite, and Roblox.

Companies that want to succeed in the Metaverse have to accept and use games to their advantage. To reach this “Metaverse generation” and create tailored advertising, companies need to place their products in the social video game environment where these individuals spend their time.

Janine also argues that Metaverse users are not interested in content similar to what exists in real life, as it would be too boring. In her opinion, what will motivate new users to join this virtual world is the possibility to be creative.

Regarding the methods used to launch and market in the Metaverse, Janine believes that companies will have to target a new generation of celebrities: gamers, streamers, and YouTubers. These will be the new heroes of the Metaverse.

A World of Experiences

Improbable is a British technology company that seeks to create new ways to connect users and create value through interlinked virtual worlds. Herman Narula, the company's co-founder and CEO, explained the importance of being able to deliver experiences through the Metaverse.

Narula believes that the evolution of the Metaverse should be accompanied by a practical manifesto. A set of principles that must be followed if this virtual world is to achieve anything of value.

Improbable’s CEO described the theory of self-determination to explain why people enjoy video games. People just want to be able to feel fulfilled, either by improving their skills, feeling like they are doing something valuable, or feeling valued.

So the company has been trying to develop new ways to provide valuable experiences within the Metaverse. One of the aspects they are always trying to improve is called Operations per Second. A concept that basically determines the number of people a world can hold perfectly at the same time.

Improbable can bring together up to about 20 000 people from all over the world who can communicate with their own voices and interact with others users and eventually even celebrities, sports stars, and influencers in a way that would be very difficult in the real world.

Moving from experiments to business, Narula believes that Web3 is currently the best solution as a tool for managing the Metaverse economy. This technological evolution includes non-fungible tokens (NFTs) and other cryptocurrencies.

Besides experiments and economics, the last step in building the Metaverse includes decentralization. This involves moving to a model that works more like a community, where Metaverse’s core infrastructure can receive investment from multiple companies and the value resides not at the platform level, but at the app level.

Improbable is trying to do this with project M2. A platform that will be owned by a network that will receive contributions from various parties.

Narula believes that, in the short term, Metaverse will be a great economic opportunity. Not for video game companies (whose environment is already crowded), but for everyone else who wants to provide new experiences by interacting with their audiences.

In the long term, this space could become an engine of fulfilling experiences, growth, and social extension for its users.

Will We All Become Digital Owners?

Yuga Labs is a blockchain-based technology company that develops NFTs and digital collectibles. Nicole Muniz, the company’s CEO, attended the Web Summit to explain to us the importance of NTFs in the Metaverse and show us the world her company is building.

From her point of view, NTFs are important in the Metaverse because they assign ownership to those who have purchased any kind of good. In this space, consumers have the power to become owners.

Thus, evolving to Web3 is vital to the functioning of the Metaverse. Web3 allows people online to be their own owners, to own their character online, and any assets they may own.

Yuga Labs is currently developing its own world in the Metaverse called OtherSide. This gaming world has a storyline, gameplay loop, and many other things to do. It will also have 100 thousand completely different plots and several distinct environments.

In this world, users can be who they want to be, own their identities, and do just about anything in their interest. They will be able to acquire their space where they can build anything they want. Anything that is built in their space will be their property.

Nicole hopes that all the property built in this Metaverse world will one day be transferable to other worlds. Likewise, she would like users who join this world to be able to bring with them the creations they have originated in other worlds.

The Future of Metaverse: The Vision of 5 Companies that were at the Web Summit - Final Remarks

There is no doubt that the Metaverse is the future of the way we communicate online and express ourselves. However, this technological revolution is just taking its first steps and its future is still uncertain.

In this edition of the Web Summit, we had access to 5 different points of view regarding the potential future of the metaverse. 5 company leaders in this industry gave us their opinion and shared with us their expectations for the evolution of this virtual world.

But while the Metaverse is not yet what you dream of, you have a decision to make: do you wanna wait for the future to arrive... or do you wanna help create it?

At KWAN we work every day with projects that will take us all in the direction of a Bright Future! Be part of it, check our work opportunities. 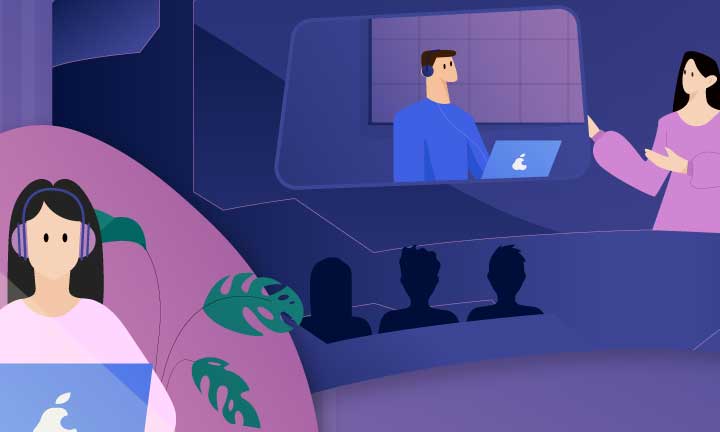